Fingal Bay
So much to discover, an explorer's paradise.

Fingal Bay was originally known as False Bay as, in the 19th century, it was sometimes mistaken for the entrance to Port Stephens. This picturesque village is surrounded by the Tomaree National Park.

The area has a magnificent beach with an infamous walk across “the spit” to view the burnt out ruins of the outer lighthouse residence. Explore Fingal Head and enjoy the views. 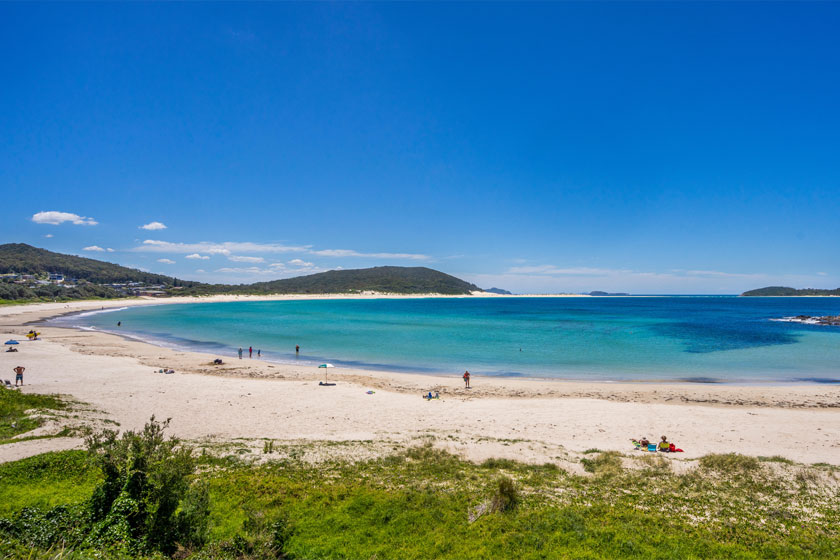 There is some great fishing off the beach as well as the Headlands. Many large fish has been landed off the spit. This beach is very popular with surfers and is quite protected by the headland in the southern corner.

Fingal Bay has a resort, a patrolled beach, a boat ramp and fishing from both the beach and from Fingal Head. Whales can sometimes be spotted offshore between September and November or, less frequently from late May to July. They like to rub their barnacles off on a reef 50 m offshore.

The views over the bay are just beautiful. The sand is white and clean and you can walk right up to the spit of sand which goes over to the island.

There is ample space to get your own spot away from others. The beach is ideal for a young family with showers when leaving the beach and tables and chairs to sit at.

There is a a decent fish and chip shop close by, and a cafe and bathrooms that are easily accessible. Nearby Nelson Bay has a bigger variety of shops and restaurants.

What is the sand spit?

The Fingal Spit is a two-kilometre journey to the lighthouse via a bridge of sand which leads out onto Shark Island and at low tide, you can cross the spit to Shark Island from the mainland.

During high tide, the water on both sides of the point merges, and the sandy walkway is submerged beneath the surface of the sea. Aerial photography of natural phenomena is popular among photographers.

Can you cross the sand spit?

It’s important to check first, as there are times when crossing the sand spit is not allowed. Seawater covering the spit, as well as deep waters and ocean swell can make the crossing extremely unpredictable and hazardous.

When you can cross, in order to avoid having to wait for the next low tide to cross the sand spit, you should only do so when the sand is dry.

Check the tides and weather in Fingal Bay so that the water does not cover the spit while you are touring the island.

There is a good range of holiday units, houses and other accomodation available at Fingal Bay. 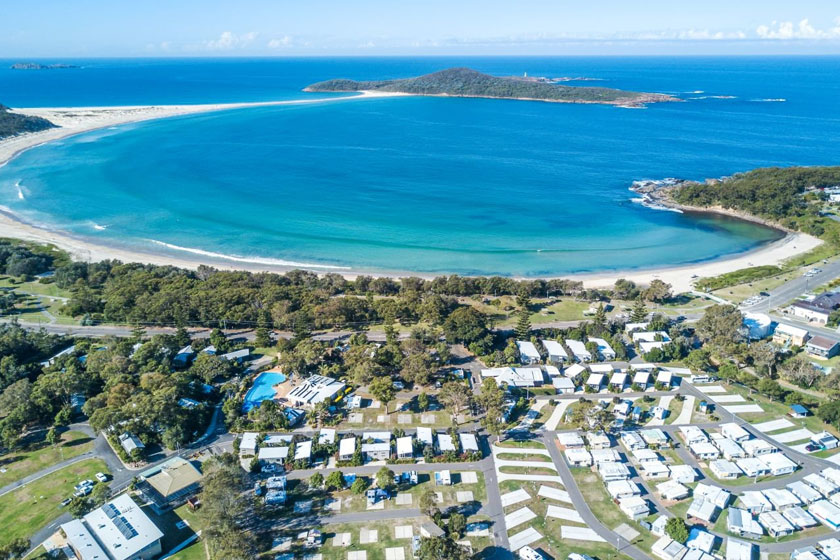 Fingal Bay caravan park has a fantastic location right on the beach within a short walk to everything.

Can you swim at Fingal Beach?

Fingal Bay Beach is perfect for swimming. The beach is patrolled during the swimming season by a team of surf life savers.

There is a long curving crest of white sand with gentle surf on either side if the spit at the northern end.

The beach is surrounded by tranquil native bushland. The southern end is a great spot for little snorkeling among the rocky headland.

Is Fingal Bay good for surfing?

Fingal Bay Beach is the one of the most popular surf spots around Port Stephens. The beach breaks work best during southeast swell, with swell higher than 2 m producing a southern point break. The beach is ocean facing, and is patrolled for safety. There are plenty of onshore facilities, so that you can make a day of it.