Port Stephens Lighthouse
Discover the guardians of the 'shipwreck coast'

Explore a Port Stephens lighthouse, there are a few to visit within easy access of the area. In the early days passing ships and whalers used Port Stephens as a source of wood and water.

The approaches to the Port were dangerous and there were plenty of shipwrecks: 24 by the time the first lighthouse was built at Point Stephens in 1862. 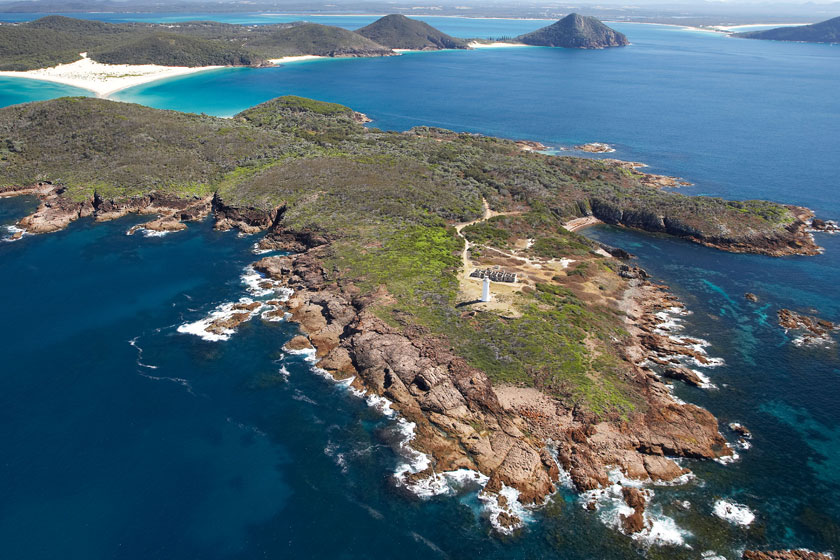 Another lighthouse was erected at Nelson Head in 1872. Though they may have stemmed the tide they did not end the wrecks.

There are a couple of great Port Stephens Lighthouses in the area.

The Fingal Head Lighthouse near Fingal Bay was erected in 1872 of stone, and painted white, the tower had a fixed white light of 1,000 candelas.

Even though the light tower is not high and it is built on a low headland the light is effective as it is built on one of the most easterly points of Australia with plenty of deep water offshore.

The original kerosene wick burner was converted to automatic acetylene operation in 1920 with an output of 1,500 candelas and altered to group flashing. The one keeper was withdrawn at this time.

There is no record of the opening of this light considered so insignificant that apparently the first keeper did not think the matter of sufficient importance to take a record of the official opening.

The last upgrade to the Nelson Head Inner Lighthouse was in 1995 when a solar powered occulting white and red sector light was installed.

The lightkeepers house is attached to the light room and was built in 1875 for the original keeper William Glover. His son Frances was later the keeper of the Outer Light.

A trust was established in 1986 to restore the Inner Lighthouse and cottage, and since then has become a major tourist attraction for Port Stephens and is now heritage listed.